07 April 2016: A new wet snow cover product is now available for the Alpine area. The product development started within CryoLand, and was completed within the EU FP7 project SEN3APP. Demonstration products of the melting season 2015 over the Alps, as well as new products for the melting season 2016 will be provided through the CryoLand GeoPortal.

The Snow Products website, as well as the CryoLand4Newbies document were updated with this new product Wet Snow Cover over Alps (multitemp_SCAW_Alps_Radar).

08 April 2015: For automatically accessing, downloading and analysing CryoLand products we provide for your convenience new scripts written in Python and IDL in the Downloads menu (link). Feel free to use or adapt these scripts according to your needs.

The ice break up happened on Torne River on 6 May 2013. The CryoLand team observed this event by means of a TerraSAR-X scene.

The ice break-up of Arctic rivers can have serious consequences for local residents and infrastructure. The drifting ice floes can jam up behind obstacles in the rivers (e.g. bridges) and cause so-called “ice jams” that can lead to widespread floodings due to the dammed water masses. Therefore, a timely monitoring – which is possible with satellite data – in this crucial time of the year can save lives and property.

The Torne river divides Finland and Sweden, and discharges into the Gulf of Botnia (see Figure below). The two adjacent towns Tornio and Haparanda are located close to the estuary of the Torne river and have in total more than 30 000 inhabitants on the Finish and Swedish side.

The left figure shows the preliminary analysis of the Torne river during the ice break up on 6 May 2013. The TerraSAR-X image covers the area from the river mouth in the Gulf of Botnia in the lower part of the image to the rapids in Matkakoski about 40 km upstream at the upper edge. The full coverage of the TerraSAR-X scene is also shown in the right figure, indicated by the white outline overlaid on Google Earth. The city of Haparanda/Tornio with clearly visible bridges is situated a few km upstream of the outlet delta. Ice is visible as grey areas at the sea, in the delta, and in the wider section about halfway from Tornio to Matkakoski. Open leads are indicated on the TerraSAR-X preview in the left figure by pink areas. 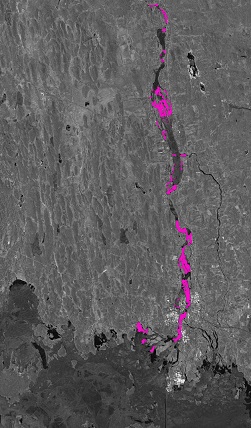 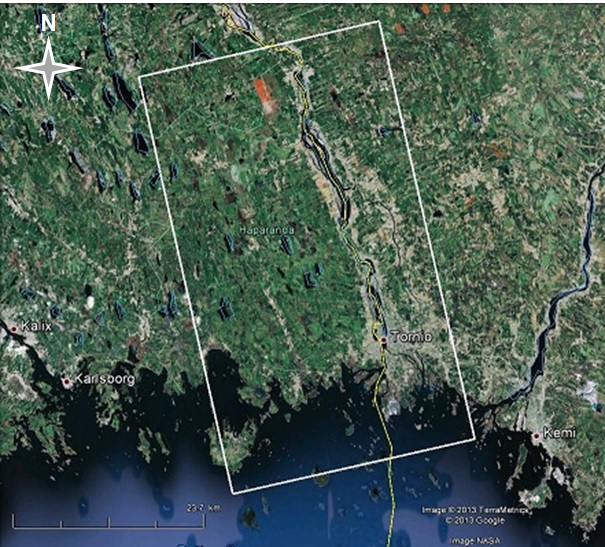